In the summer of 2013, Burpee Museum’s field crews discovered a rare dinosaur while on expedition in Montana. This dinosaur, nicknamed Pearl, was found by Highland Community College Professor Steve Simpson and students while prospecting for new sites. When Pearl was discovered, she was part of an undescribed species of North American Caenagnathid Oviraptorosaur. The Burpee field crews were fortunate in the timing of the discovery, accompanying them in the field at that time were paleontologists Thomas Holtz, Jack Horner, Mark Goodwin, and Tyler Lyson. With their help, the Burpee field crew realized that this new find was exceptionally rare and very exciting.

Other specimens of this same undescribed species had already been found by the Carnegie Museum and the Marmarth Research Foundation, and a team of researchers was working on a description of the new species. On March 19, 2014 paleontologists Matt Lamanna, Hans-Dieter Sues, Emma Schachner, and Tyler Lyson published their description of a new North American Caenagnathid Oviraptorosaur named Anzu wyliei. Their description, “A New Large-Bodied Oviraptorosaurian Theropod Dinosaur from the Latest Cretaceous of North America” was published in the open access journal PLOSOne. Pearl would have been a feathered dinosaur, 3.5m (11.5ft) long, 1.5m (5ft) tall at the hip and weighing in at about 200-300kg (440-660lbs).  These dinosaurs are edentolous, meaning that they did not have any teeth; despite this it has been suggested that they were omnivorous and ate both smaller animals and plants.

Pearl will add to the understanding of this new species because she can fill in some of the missing skeletal elements that the holotype and referred specimens don’t have – particularly feet and toes. Keep checking in at No Stone Unturned for the most up-to-date information about Pearl and all of Burpee Museum’s other endeavors!

More cool installation happening in the SupplyCore Hall of Paleontology in preparation for “Homer’s Odyssey: From the Badlands to Burpee” – the crew from Xibitz has been hard at work most of this week! What do you think will be going on this wall??

Today is May 29, 2013, in exactly one month the “Homer’s Odyssey: From the Badlands to Burpee” will premier as Burpee Museum’s newest permanent exhibit! 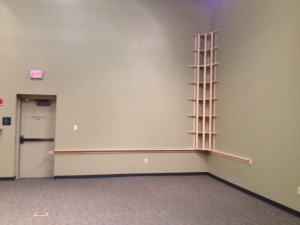 This week the first stages of installation for the exhibit began in SupplyCore Hall of Paleontology, as seen in the picture above. Can you guess what this structure might be for?

We’ll keep you updated as more pieces of this incredible exhibit go up!

No Stone Unturned has been woefully neglected as we’ve been planning the wrap-up and deinstall for the “Rick’s Picks: A Lifelong Affair with Guitars and Music” and the installs for “Treasure!” – a joint traveling exhibit with the Discovery Center – and “Homer’s Odyssey: From the Badlands to Burpee.”

Through all of that we’ve seen steady sign ups and inquiries about this summer’s expedition programs. We still have room in Utah, Week 2 and Montana, Week 5. We will also be hosting an Expedition Orientation at Burpee Museum on April 20, 2013 from 1-3pm. Anyone interested in expeditions is welcome to attend and learn more about our expedition programs.

We have lots of information to share from the past several weeks, so be prepared for more posts in the near future!

Who wants to come dig up dinosaurs with us this summer?! Seriously, who wants to sign up?

After a little deliberation, we are set to move forward with finding some awesome expedition crew members for this summer’s dinosaur digs in both Utah and Montana.

Our expeditions work a little differently than traditional geology or paleontology field camps. Our field crew members range in age from high school students to retirees, and they bring with them a diverse range of life experiences and skills to the team. The one thing that they all have in common: they all have a passion to dig up dinosaur bones. And, instead of tent-camping for weeks on end all of our expedition crew members have the opportunity to come back from the field each night, get a hot shower and sleep in a bed. (However, if you really enjoy tent-camping that can be arranged for you too!) Our crew members can also vary their length of time that they are in the field. The Jurassic Journey program in Hanksville, Utah allows members to stay any length of time between three days and two weeks. In the Highway to Hell Creek program in Ekalaka, Montana the minimum stay is one week and the maximum stay is two weeks.

We are incredibly lucky to have two highly successful field programs that are productive year, after year, after year.  We have been going to Ekalaka, Montana and staying at Camp Needmore for a decade. Camp Needmore serves as a great base camp with plenty of space for even our largest field crews. From camp we head out each morning to the beautiful Montana badlands to dig for dinosaurs in the Hell Creek formation. The Hell Creek formation is one of the classic Late Cretaceous formations, and has yielded Tyrannosaurus rex, Triceratops sp., Edmontosaurus sp., Dromaeosaurus sp., Thescelosaurus, and Pachycephalosaurus dinosaur fossils as well as an astonishing number of microvertebrate fossils from fish, mammals, salamanders, frogs, and turtles. Our Highway to Hell Creek program is the same program that allowed us to find and bring home “Jane” the juvenile T. rex and “Homer” the juvenile Triceratops. Recently we have been working on an important site, affectionately called the Ninja Turtle site, where multiple fossil turtles have been uncovered, as well as sites containing a large Triceratops specimen and an Edmontosaurus specimen.

We have been digging in Hanksville, Utah since 2008 – it is a truly amazing site. The locality is found in the Morrison Formation and is Middle Jurassic in age. Once a braided river system, the sauropod-dominated site is a log-jam of bones. In true Burpee fashion, the fossils are smaller than expected and may represent a collection of juvenile sauropods. Here we have uncovered a substantial portion of a juvenile Diplodocus nicknamed “Jimmy” as well as fossils from Apatosaurus, Camarasaurus, and Barosaurus. In addition to the sauropod fossils uncovered, we have fossils from Ceratosaurus and Allosaurus specimens as well. The Jurassic Journey expeditions to Hanksville, UT allow for some of the poshest fossil dinosaur dig amenities around. The town of Hanksville is our home-base, many crew members stay in a local hotel, The Whispering Sands, and enjoy breakfast at Blondie’s Cafe each morning before we head out to the field. Most field weeks are wrapped up by an evening adventure up into the Henry Mountains for a crew cook-out and bonfire.

If you are interested in joining us check out the 2013 Expeditions Page or download the Registration Forms.

A beauty shot of “Homer” our teen-aged Triceratops who will soon be on his way to RCI in Toronto!

Don’t miss your chance this weekend to wish Homer Bon Voyage before he travels to Research Casting International in Toronto, Canada to be mounted. This mount will be featured in our upcoming “Homer’s Odyssey: From the Badlands to Burpee” exhibit opening in May.

Homer will come off exhibit on Monday and be very (very, very, very) carefully packed up will all of his other pieces. All of the Homer material will be packed in custom made cradles and boxes, which will then be packed into a customized shipping crate. Soon after all of the customizing and packing is finished, the Homer transport crate will be loaded into the museum trailer and driven to Toronto.

We will have more pictures coming from the packing, traveling, and delivery at RCI! Leave us a question about the packing, shipping, or transport process …. or leave Homer a message!!

The last of the Montana dig sites have been put to bed and the Burpee Crew is moving on to other destinations. Before returning to Rockford, Scott and Steve will be taking Katie to her latest and greatest destination, Montana State University in Bozeman, MT! As you may remember from her post earlier this summer, Katie will be earning her Master’s degree at MSU as she works in the Horner Lab as a research assistant. The Burpee family will miss Katie, but is behind her 110% as she pursues this endeavor!
Stay tuned for a field season photo recap and new posts from the lab!

A Blog About Theatre, Film/TV, and Literature

Rants and raves on dinosaurs and stuff

No Stone Unturned
Create a free website or blog at WordPress.com.